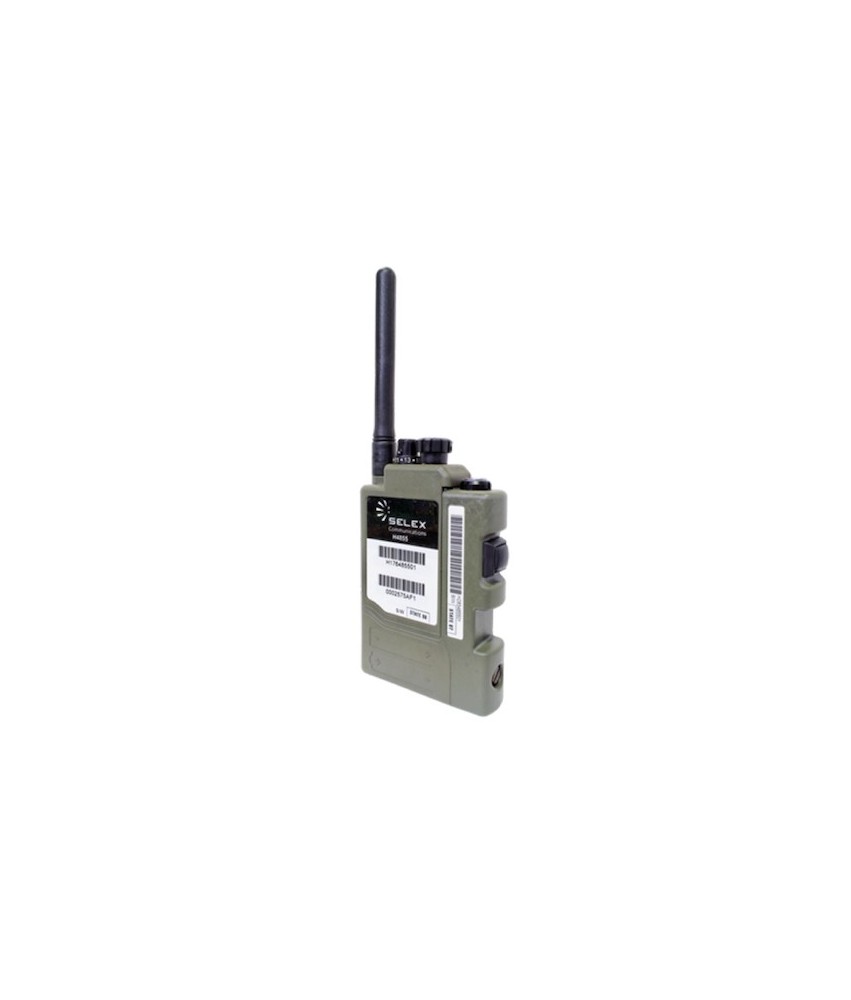 Only available in large quantities. The PRR uses advanced 2.4GHz spread spectrum technology innovatively packaged to meet the demanding needs of the soldier. The PRR system is easy to use through its simple man machine interface, is unobtrusive and comfortable to wear yet is rugged enough to sustain the harshest environments presented by active front line operations.

Today’s theatre of war is a dynamic, asymmetric battlespace, with forces on the ground often involved in simultaneous operations and with an increased emphasis on urban warfare. The Selex ES Personal Role Radio (PRR) significantly enhances combat effectiveness by providing all informed communications to front line soldiers; replacing traditional methods based on hand signals and shouting. Users on active service have described the introduction of PRR as having a profound effect on the operational effectiveness of infantry.

• Typical operating range is 500m in open terrain, and through three floors of a building

• Wireless Press to Talk with up to 2m range

• Operates independently of any infrastructure

The modularity of the PRR design leads to flexibility and its use in many scenarios. It includes a unique wireless Press To Talk (PTT) that enables the user to operate the radio without removing his hands from his weapon, it has an interchangeable switch pack that allows configuration to different roles e.g., interface to a commanders radio and  ancillaries that can be tailored to suit the needs of all users.

The use of PRR within infantry units greatly enhances all aspects of dismounted combat. Operations are much slicker, more effectively applied, better co-ordinated and safer. Key improvement areas are:

• Improved targeting and direction of fire

• Base station for Command & Control posts

PTT switch packs The PRR can be configured in two roles. The PRR body is fitted with one of two interchangeable PTT switch assemblies:

• Dual PTT Switch Pack = Commander is able to connect to the PRR and Combat Net Radio (CNR). An audio ancillaries socket is incorporated into the Switch Packs in which the Lightweight Headset, or alternative ancillaries, can be connected.

Audio from the CNR and PRR are both heard in the same earphone, but not at the same time. If the section commander is talking on the PRR and the platoon commander calls him, he will receive a ‘call waiting’ audible tone.
Second radio interfaces can be provided for MBITR, Harris, SINCGARS, PR4G, Bowman, TETRA, ICOM, Motorola and other professional radios.

The emergence of small, low-power Global Positioning Systems (GPS) and other sensors and target designators will enhance operational efficiency, provided that the information can be delivered to the right place quickly. To support data transfer within the infantry section, PRR has been enhanced to provide a data capability.

• Specialist ancillaries capability for both overt and covert applications, supporting the PRR with a comprehensive range of equipment, including headsets for all applications including high noise, active noise reduction, in-the-ear, low profile, lightweight, discreet, covert tactical speaker-microphones and waterproof communications solutions, which meet the requirements of a diverse range of users.

To communicate whilst wearing an NBC respirator, a Microphone Adaptor is available, which connects the Lightweight Headset’s microphone to the NBC respirator, delivering a high level of speech clarity. The PRR and associated equipment is NBC compatible and can be worn outside an NBC suit.

RE BROADCAST UNIT PRR is designed to support operations performed by a deployed infantry section. However, there are operational scenarios where the infantry section is deployed over extended ranges or there are particularly demanding requirements placed upon the communications systems e.g. operations in enclosed spaces such as buildings or maritime platforms. A typical scenario is to provide communication between an internal building search team and external protection elements. The re-broadcast unit can also be used to overcome problems in difficult environments such as the jungle where heavy foliage and high humidity are common. For these situations the re-broadcast unit doubles the range provided by the standard PRR.
The re-broadcast unit consists of two inter-linked PRR’s and filters, packaged in a saddlebag. The physical configuration is small, light, easily carried and deployed by operational troops. It also provides a flexible solution for a range of deployment scenarios.

Be the first to write your review!

9 other products in the same category: